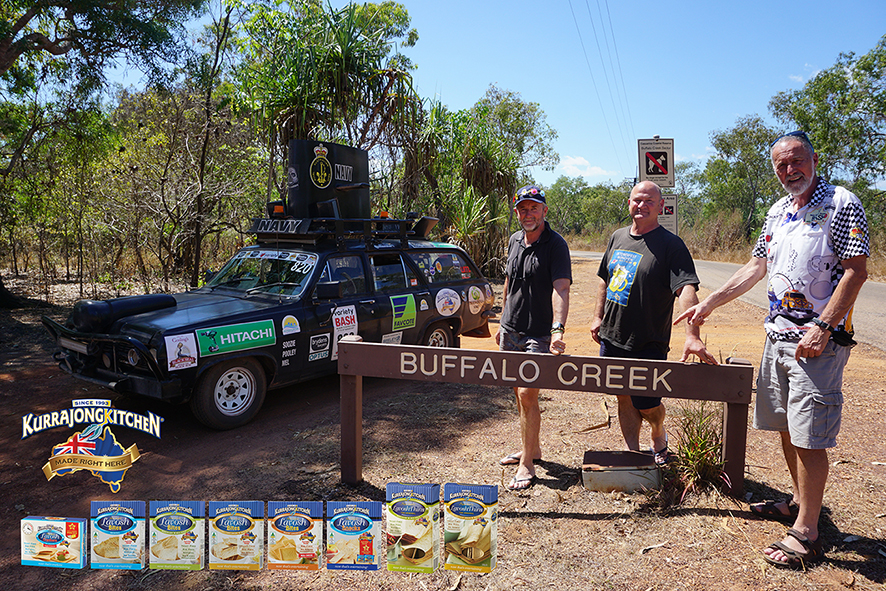 Kurrajong Kitchen first sponsored the Navy Team in 2004 on their quest from Belmore to Buffalo Creek to raise money for the Variety charity, making sure they ate their fair share of Lavosh along the way. Continuing to sponsor this great team over the past years, we always look forward to stories and photos on their return. This years story was written through the eyes of a virgin Basher. Enjoy the read.

The Navy Team supported by Kurrajong Kitchen very recently returned after participating in the annual NSW Variety B to B Bash.  The team consisted of two experience members and one Bash Virgin who told us his story about this years Bash:

“I had long known about and wanted to join a Variety B to B Bash, right back to 1985 when Dick Smith did the first one with a few mates in old cars driving from Bourke to Bourketown, to raise money for kids in need.  This year my opportunity finally came.

As August approached, we finalised preparations and inspections on the car, met with donors, got together wacky costumes for the various themed days of the Bash and packed up goodies for our many school visits. Anticipation hit fever pitch on the morning of 3 August, when we joined 90 cars and about 300 other Bashers in the St Mary’s Leagues Club (Western Sydney) car park for departure.  What an amazing assortment of cars, themes and costumes to behold- from the Batmobile (1966 Dodge Phoenix) to a couple of Hearses (1965 Chev Belair and 1959 Ford Ranch Wagon), the Blues Brothers mobile (1976 Statesman) and Cracker Baron’s Firetruck (1970 Mini Panelvan), as well as our own Navy Submarine (1966 Holden HR).

And then it was GO – the adventure began – and we hit Boronia Road, on our way to Buffalo Creek (near Darwin), almost 5000km and 11 days away. West to Bourke, then north into Queensland through Thargomindah, Blackall, Winton and Mt Isa, then on to Tennant Creek, Katherine and Jabiru in the Northern Territory.  We drove heaps of dirt and found lots of red bull dust, met incredible people and kids along the way, stopping at schools for breakfast and lunch where we did various charitable activities.  By the time we got to Buffalo Creek we were generally pretty tired – but with huge smiles from ear to ear.  The NSW Variety Belmore (Sydney) to Buffalo Creek Bash raised $1.85 million to help Aussie special needs kids.”

The Navy Team Captain said “participating in the annual B to B Bash is a fantastic experience and the Navy Team is very proud to be involved in such a group of like minded, charitable people.” He continued “And we would be unable to achieve this without the support of businesses such as Kurrajong Kitchen and we and Variety sincerely thank them for their continuing support over a number of years.

Other exciting news from Kurrajong Kitchen

Latest from Kurrajong Kitchen
exciting news straight from our kitchen

Stay Informed keep in the loop with exciting news