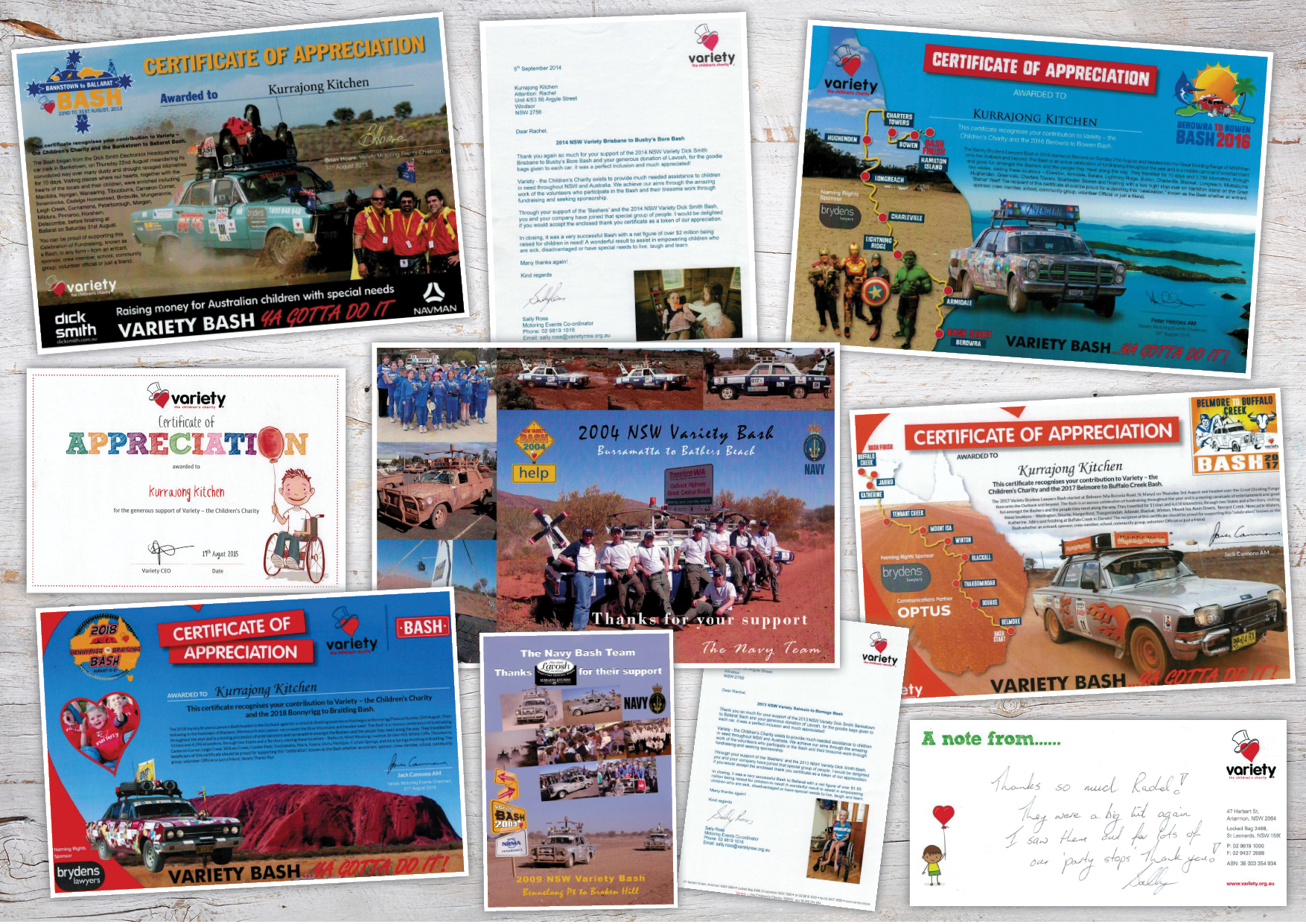 We’ve been proud supporters of the Variety Club Big Bash for 15 years. And on 28th July, they’ll be setting off from Bondi heading to Batt Reef, Port Douglas (with ample supplies of Kurrajong Kitchen® Lavosh to help keep them replenished of course!) This year, as with every year, we were able to contribute to 350 goody bags, each one including delicious Kurrajong Kitchen® products. We’re putting our support behind the NAVY Team and wish the crew all the best as they travel across our beautiful country, raising money to support kids in need. 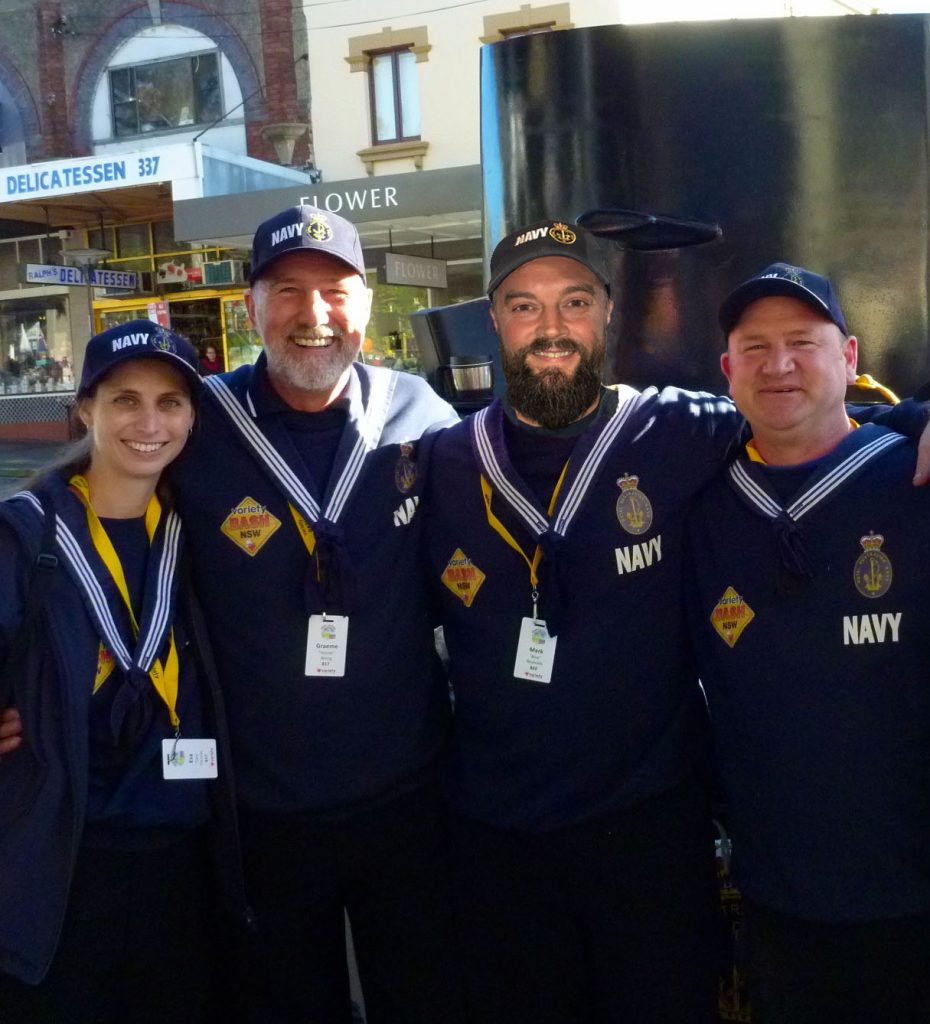 Since 2003, we’ve been cheering for the Navy Bash Team and supporting them in whichever ways we can. Graeme “Soozie” Wong who was part of the 2003 team says, “Our relationship with Kurrajong Kitchen started in that first year when I invited Karen to support the Navy team and the Bash with some snacks at the Bash finish at HMAS Cairns. Since then we’ve had Lavosh to keep us going on the road every year and now every one of the 100 plus participating cars have Lavosh in their Bash Bags.”

Kurrajong Kitchen will again support the Navy Team and the Bash this year as they travel from Bondi to Batt Reef (Port Douglas QLD) – a 9 day, 4350 km drive. The Navy Team will consist of Soozie with Brian “Pooley” Poole (Captain), Esa “Ejay” Thomas and Marcus “Weeds” Weedon.  This is a special year for the team, Pooley will complete his 10th Bash, Soozie his 15th and Ejay, a veteran of 6 Bashes, is looking forward to taking Weeds (a bash virgin) under her wing and showing him the ropes.

Ejay first began Bashing in 2010 and became involved as a bucket list adventure, which started way back as a young girl who used to watch the Bash on the TV each year. “Not only have I witnessed the fun and spectacle of the Bash,” she says. “but I am a part of the team bringing joy and much needed support to children and communities, all over Australia, who need and deserve a helping hand in life. ‘We drive the miles for smiles’ is such brilliant a catchphrase because who couldn’t smile when you witness a child receiving a gift to make their life just that little bit easier!”

Weeds became interested in participating in the Bash after hearing about the Navy Team’s involvement in 2016. His friend Ejay’s accounts of her Bash adventures over the years really fueled his interest. “This is the first year I have had the opportunity to be involved,” he says. “I have been deployed overseas with the Navy during the Bash dates since 2016.”

The Bash is the biggest fundraiser for Variety the Children’s Charity, raising 5 to 6 million dollars each year Australia wide. Since 2003 the Navy Team has contributed more than half a million dollars. All funds raised by Variety in Australia help Australian kids be kids. 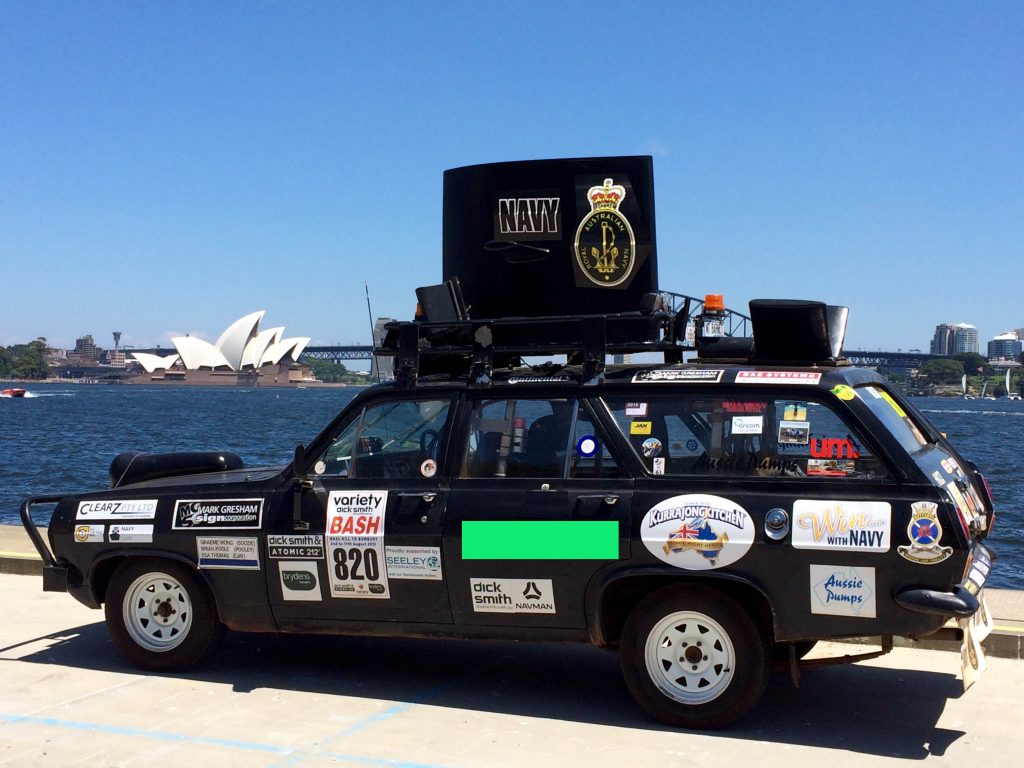 We’ve been proud supporters of Team Navy since 2003.

As Australia’s longest-running and most famous charity motoring event, the Variety Club Big Bash is an important event and one that we’re honoured to be a part of. Rather than a race or rally, The Variety Bash is a fun and social event. Founder Dick Smith described is as “A drive in the outback with a few mates”. A once in a lifetime chance to experience remote and regional parts of Australia, many people sign up, just to be part of such a significant event, and it’s all in support of Variety – the Children’s Charity.

Throughout the Bash, participants visit local towns, stopping into schools and organisations to visit the kids. It’s here that the ‘Bashers’ are able to see the direct impact of their fundraising efforts along the way, with a range of educational, health and mobility equipment provided to local schools and organisations en route. With festivities along the way, from theme nights to entertainment and other activities and games on the road, the Variety Bash generally runs for 10 – 12 days depending on where the final destination has been set. What an amazing event to be a part of.

Go NAVY Team!!! We wish you all the best. Love from, the Kurrajong Kitchen family. 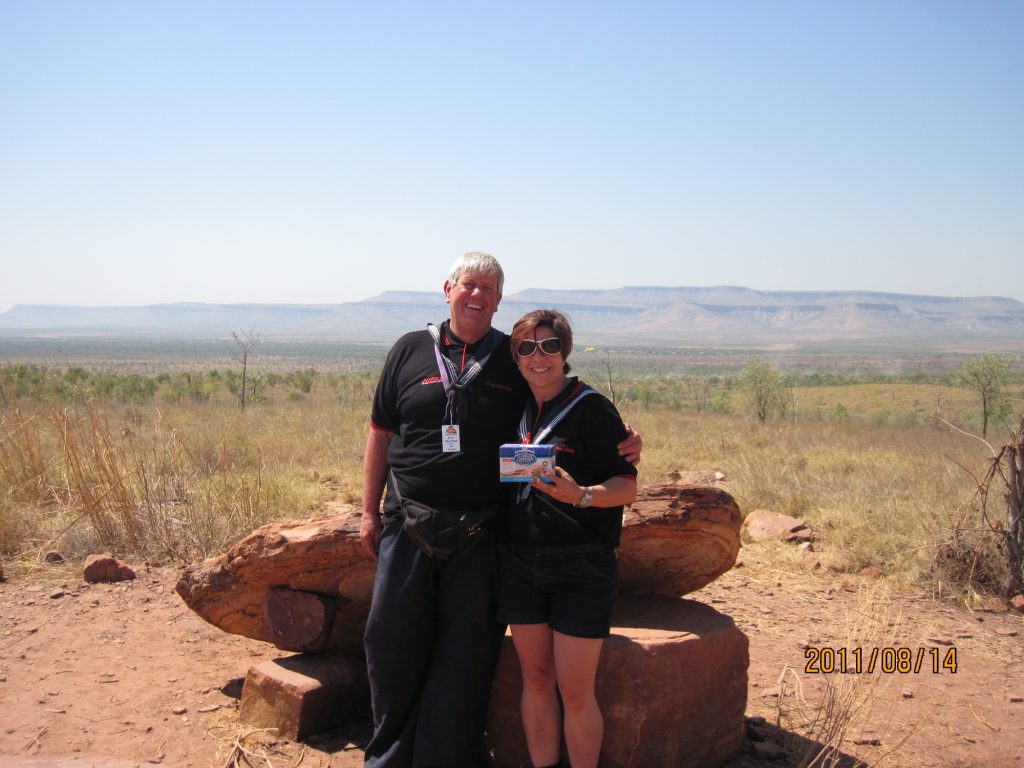 The 2011 team stopping for a snack, at the Pentecoste River Valley, along Gibb River Road. 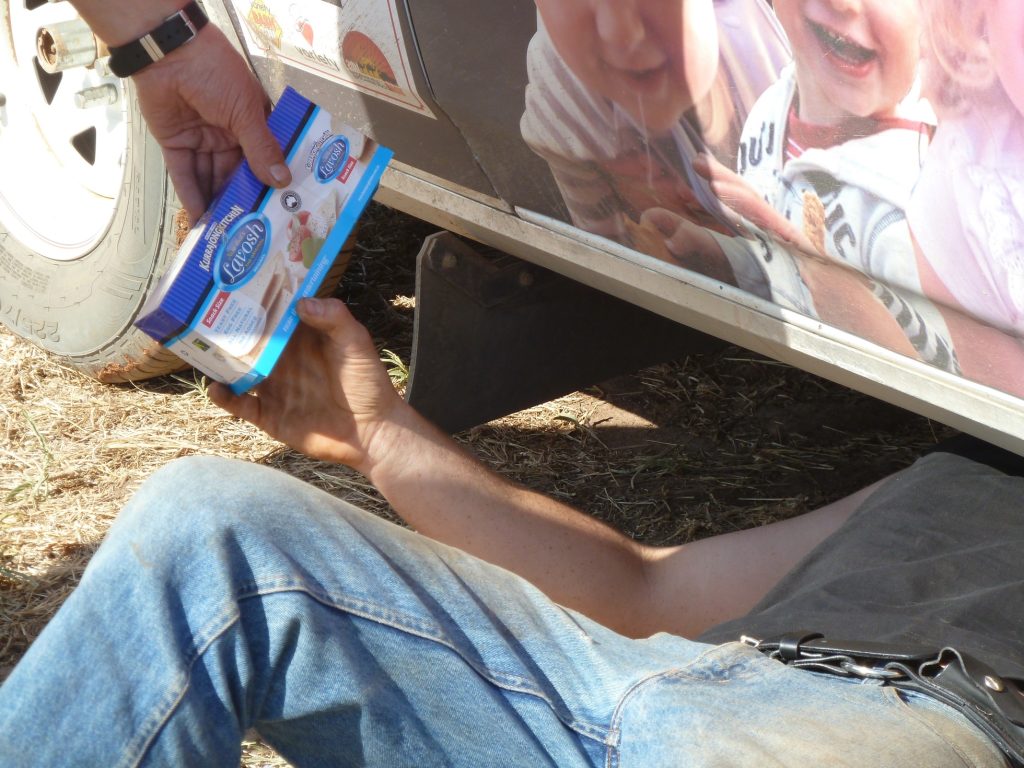 Don’t forget the mechanic! Our team always has a hearty supply of Lavosh, for those maintenance stops along the way. 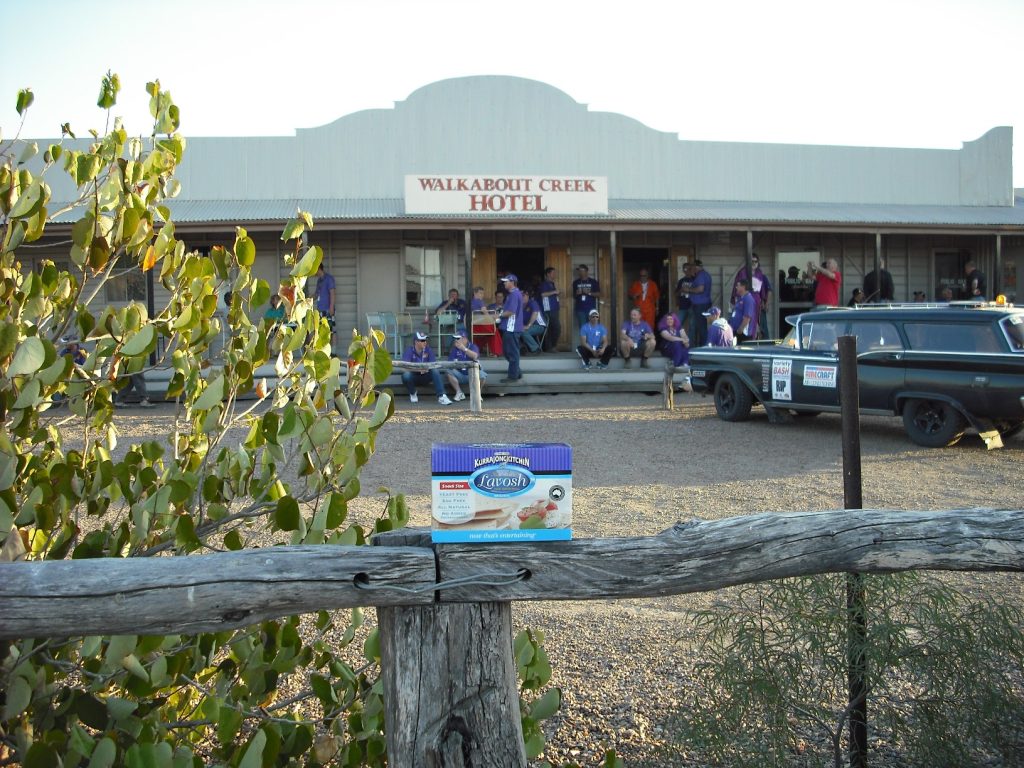 Recognise this spot? Crocodile Dundee was filmed here! Just another stop along the 2011 Big Bash! 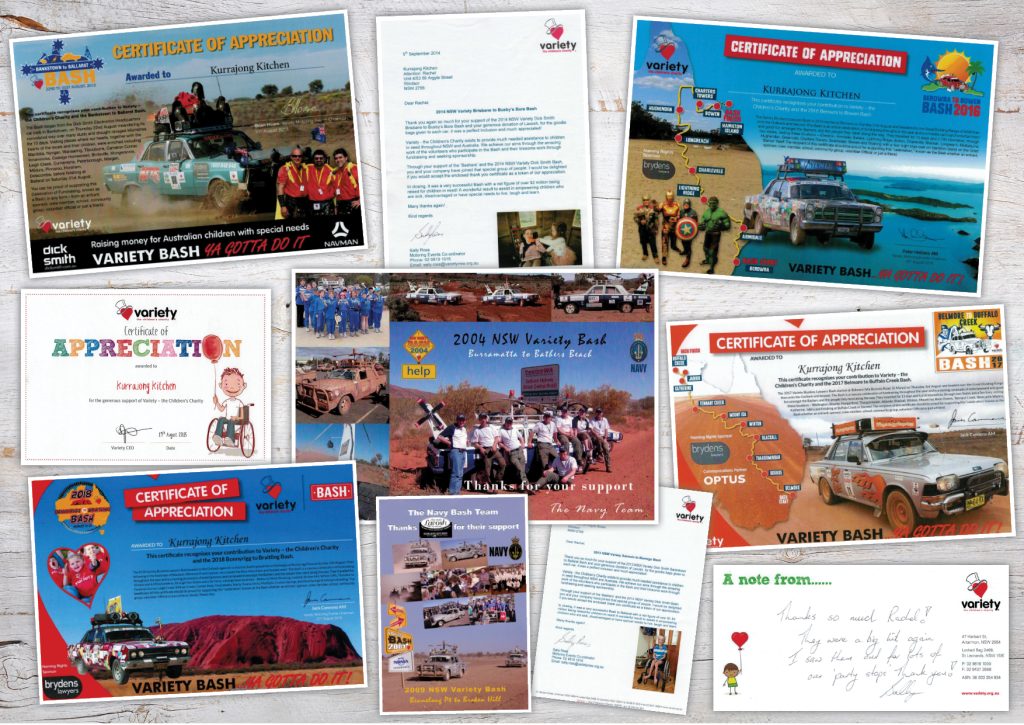 It’s been an honour to be part of the Variety Club Big Bash for 15 years!

Other exciting news from Kurrajong Kitchen

Latest from Kurrajong Kitchen
exciting news straight from our kitchen

Stay Informed keep in the loop with exciting news